Remember that sometimes not getting what you want is a beautiful stroke of luck.” -Dalai Lama

My mom’s smirk didn’t bother me, nor did her continual reminder that she was “winning” our bracket competition.

“Oh, come on, Meg, you’re just saying that because I’m winning. Of course you care about your bracket! Why would you put all of that work into picking winners of the basketball games if you don’t care about the outcome?”

She had a point… I lived for bracket reveal Sunday every March, called it my “Christmas” of sorts, spent hours poring over the match ups the next three days, studied the rankings, strength of schedule… and then… when Thursday came.

I sat back with a smile as it all turned upside down.

“I can’t explain it Mom, but the fact that I put so much work into trying to figure something out, only to have it completely flipped on its head in a matter of hours… there’s just something about it that adds to the fun. In fact, it’s that chaos that makes me love the whole process so much.

My littlest sister met up with us for a game later that day; After a little catching up, she used a halftime break to bring up another recent event.

“So, I saw you posted the cover of your next book, Girl Enlightened — What exactly is it about again?”

My pulse picked up — it was exciting to be getting questions about my newest piece of writing. “It’s another memoir, but a lot different than the last one. It’s about the journey I went on after Dad died, finding myself –”

“I know that much, but what… I mean, what’s like the point of it? Who are your target readers? What do you want them to get out of it?”

Her eyes poured into me, but it didn’t alter my determination. “This book is for anyone who’s ever gone through anything that has changed them — a death, a loss, even some good things. I want them to understand the journey through grief and pain and doubt and confusion; That no matter how much you plan, how much you think you have figured out, something can still come in there and shake everything…”

I paused with a smile and stole a glance at the current basketball game on the monitor.

“Even though Dad’s death was the most horrible experience of my life, even though my running injury left me more devastated than anything before it, there was this beauty in having to throw aside every single plan I’d ever made and just move forward without expectations. Through reading my book, I want people to appreciate that beauty.”

The 5-mile “Crazy Legs” race around Madison had proved a rare bright spot in the dismal spring of 2013. The cloudy weather that morning had left something to be desired, but sprinting across the finish line with a song that reminded me of my dad brought a jolt of positive adrenaline my body desperately needed. My high continued through the post-race festivities the next few hours and even on the way home… until I noticed the police cars.

Nearly 6 cars surrounded the back carriage lane behind my townhouse complex, several officers circling the area. I pulled my car into the garage and decided to see what was up in my neighborhood.

That’s when one of them approached me, frantically waving his hands and beckoning me towards him. “M’am, please, come here, get out of the garage!”

What?!” I hurried toward him, continuing my questioning. 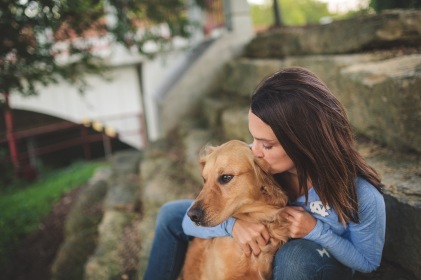 “We don’t want to alarm you, but we received a call, there are two men in your house…”

“Ma’m, I’m sure she’ll be fine, we’re sending someone inside, we just need you to…”

“NO!, no she won’t, she won’t be fine, you don’t understand, she’s everything to me, my guardian angel, my… SHE WON’T BE OKAY!”

Tears gushed from my eyes as the somewhat startled officer tried to calm me down, telling me it would all be okay. But it wouldn’t be. Four months ago I’d believed things would always be okay. That was the assumption. Sure my life hadn’t been easy — my parents’ divorce, Dad’s drinking, but nothing tragic had every happened, nothing devastating…

Until that day in January, until that phone call, the finality, the… funeral.

I had no reason to believe things would be okay any more. My dog was in that house with two men who cared little enough about the law to break into it in the first place, why wouldn’t they —

“Wait a minute, that’s not the house.” A blonde woman from another one of the nearby complexes came running towards us. “It’s the one next door with the black BMW, that’s the house I saw them go in.”

Without waiting for another word, I sprinted into my empty house to fine my whining, wagging-tailed Golden Retriever waiting to greet me.

Given my neighbors next door had been home, we never really did find out what the girl thought she had seen.

Sometimes our lives have to be completely shaken up, changed, and rearranged to relocate us to the place we were meant to be.” -Unknown

I wrote those words to myself in the Spring of 2014. Not in a blog post –they weren’t meant for the public eye . Rather, I’d written them in a document titled “Manana 11.” Manana “I” formed the basis for my first book — 8 pages of pouring my heart out one night in 2004. In the 11 years that followed, I continued to write a similar document annually: A chance to get down my thoughts about what the past 12 months had brought with them: what I learned, what I could carry forward.

The first few months of 2014 especially didn’t bring the immediate relief I’d hoped for. Quite the opposite, sitting down in the gorgeous sun and scenery of AZ, I found myself still frustrated in my lack of progress — I couldn’t run, I still grieved my dad…

And then, somewhere in the year that followed, it all came together.Everything had led me to where I needed to be, everything had worked out.

Just not the way I’d expected it to.

That is the story of Girl Enlightened.

I’d always intended this book to be a sequel to And Then it Rained: Lessons for Life, and in some ways it is: it is the years –chapters–following my first memoir. But the thing about memoirs is that you are the character. Your thoughts and attitudes exude onto the page and as I’ve poured my heart and soul into these next pages, a much different perspective has guided me. The Megan Morrison who danced under the rain showers at Chapel Hill had finally found the answers. This Megan Morrison?

She learned to stop searching for them.