It’s what we think we know that keeps us from learning.” -Claude Bernard

“I need to tell you something funny about your book.”

The Facebook post from one of my best friends caused an instant stir of emotions. It had

been a little over a month since I’d handed my manuscript over to 7 friends and family, my “first round of readers,” to provide feedback, and I’d yet to receive any… until now.

I messaged her right away. “What do you want to tell me?” After about a half hour of waiting, I realized she’d probably gone to bed that night, meaning it would be at least 12 more hours before I’d get to hear her take on the story; the first take of anyone on the story. Anxiety mounted.

Finally, the next day, she replied back: “Oh, I just have to tell you, it was funny how perfect you thought Maya was growing up, because that’s how I always looked at you, like you had everything going for you. I wished I could be more like you.”

Huh? All that time I’d been trying to be like someone else… and someone thought of me like that? Why? How?

One of the first questions I was often asked upon telling anyone about And Then It Rained, was “Are you going to write a sequel?” My answer, until 2008, was simple and straightforward: “No.” Expanded further, I’d tell people the story in And Then It Rained was “book-ended,” no pun intended, with an explicit beginning and end — what more could I write about?

“I think you should take out the letter part.”

“What?” The piece of feedback from another of my first round of readers nearly caused me to leap out of my chair. “Take out the letter part?”

“Yeah,” my cousin continued, “I just don’t think it does anything for the story.”

My mind swirled. “But the letter is a huge part of the story–it’s the reason that Maya and I had a fall-out, the reason–”

“No, Megan, not the letter you gave Maya. The letter at the end of the book. You don’t need it. You don’t owe Maya anything.”

“Ohhhhhhh, that letter.” I sat back in my chair, my mind now swirling for a different reason. After all, the 2-page “chapter” of sorts at the end of the book, where I explain to my former friend and idol why I’d included the story about my experience with her — the ups and downs, our fall-out–was among the parts I’d scrutinized the most. I wanted her, and the reader, to understand that it wasn’t some sort of revenge effort; it was meant to help others.

I deleted it as soon as I got home.

When people ask me today, why did you write a sequel, the answer that most quickly comes 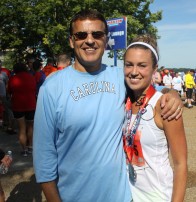 to mind is: “For my dad.” And that much is true. Within hours of his passing, I knew that now more than ever, I needed to tell the story of our relationship after my first book: of our re-gained closeness, of how he’d become one of my most trusted confidants, rather than one of my biggest disappointments. But that doesn’t mean my path to writing that next book — that story — began with his death. Rather, it began long before that.

I felt pretty darn smart upon writing down the last word of And Then It Rained; I’d learned so much over the course of those ~10 years described in the book — lessons that had made me who I was now, and had continued to drive my life. Sure, I had more learning to do, but as for the biggest life lessons? Those were in the book, I had those down cold.

We are only as blind as we want to be.” -Maya Angelou

There is no doubt that my dad’s death set me on an entirely different journey; one in which every single thing I’d ever thought about life needed re-examination; where changing

perspectives and learning new lessons became a part of my daily experience. For that reason, it is that time in my life that provided me the final direction and inspiration for my “sequel.” The events that unfolded over the course of those two years following his death, combined with so many talks, lessons, and experiences with him, suddenly laid itself out in a clear-cut flow, one that emulated the promise I’d made him to write a book that portrayed our relationship after the turmoil described in my first memoir.

Yet the older stuff was still largely relevant to the larger idea. Save for the two stories above, most of it made the cut, including one of my favorites that caused a comment from my editor:

Funny… and ironic… and eye-opening.

Perhaps equally ironic is the first title I ever conceived for my sequel: “Sunny Skies.” “And Then It Rained is a very up and down story,” I’d tell people, “my next book will be much lighter, just like I hope the years it describes will be.”

But amidst those stormier skies came what I believe is a much deeper, pronounced story that at many times, seemed to pour itself onto the

Girl Enlightened is about a journey, one of loss, of recovery, of healing, but most of all, of opening your mind and gaining a new perspective on things that you might not have had before.

In other words… Enlightenment.